I’m Thankful, How About You?

This is the time of year when Americans pause and give thanks.  I’m thankful for many things, including the new friends I’ve made (since July) when I started blogging.

Thanksgiving began in the Plymouth Colony in 1621 with the English Pilgrims feasting with members of the Wampanoag Indians who brought food as goodwill gifts.  The thanksgiving custom grew in some of the colonies as a way to celebrate the harvest. Over 150 years later (1777), a national day of Thanksgiving (a single event) was proclaimed by the continental congress after an American Revolution victory at the Battle of Saratoga.  Twelve years later George Washington declared another national day of thanksgiving in honor of the ratification of the Constitution, requesting that the congress make it an annual event (they declined).  Nearly 100 years later (1863) President Abraham Lincoln , as an attempt to bolster morale, proclaimed the last Thursday in November of each year to be a “Thanksgiving” holiday.

What makes you thankful?

Here’s my modification of a similar list I found:

On another note, the cartoon below made me think of the Lemonade cartoon I found a few weeks ago.  Ben Franklin thought the Turkey a noble bird and wanted it to be the American symbol.  This seems to provide evidence: 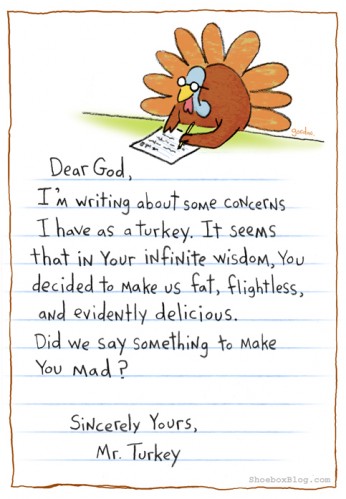 6 responses to “I’m Thankful, How About You?”