When a Child Doesn’t Read…

Make sure to help kids develop their imagination through reading.  You wouldn’t want this to happen to Peter Pan, would you? 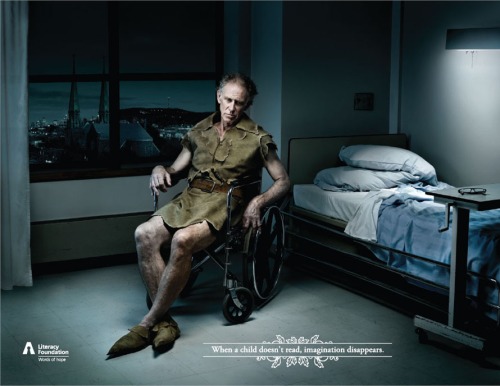 Dive Into The Public Library 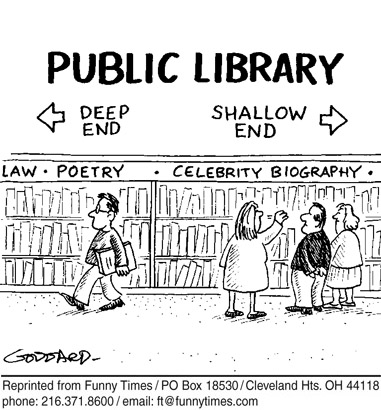 Tears for Fears – Literally… in the Library

Here’s the next entry in Literal Music Videos.  Although I liked the A-Ha video better, I thought this one was also clever.  Watch for the kid wearing the Red Sox jersey, he seems to be a real fan.  I also thought the mullet section was funny.

Haunted Libraries… it must be October!

I like books, music, and lists, so where better to find those than – The Library!  And since it’s October, it must be time for some happy haunting.  Combining all of these elements, and just for fun… we bring you Haunted Libraries!  Funny, but it seems to me that on the few occasions that I actually visited my college library as a student, the living weren’t even haunting the shelves… with the exception of the newspaper and magazine section (we weren’t particularly literate, but we were apparently well informed on current events).

Britannica Blog (click the link to see more) lists many haunted libraries from around the world, but I’m going to pick on Ohio  (with more ghosts than I would have imagined) and England (with fewer than I would have expected); just for Stacy Buckeye and A Brit in California (OK, Amber too):

I like book lists, so here’s another.  This list is specifically for teenagers who would rather read a book that was written for an adult audience.  The Young Adult Library Services Association (YALSA) has named the recipients of the 2008 Alex Awards, ten adult books with specific teen appeal:

Mister Pip has been recommended by several friends, due to my enjoyment of Great Expectations.  I’m wondering if they think I’m a mature teenager or an immature adult (tough call).

From the YALSA website: The Alex Awards were created to recognize that many teens enjoy and often prefer books written for adults, and to assist librarians in recommending adult books that appeal to teens. The award is named in honor of the late Margaret Alexander Edwards, fondly called ìAlexî by her closest friends, a young adult specialist at the Enoch Pratt Free Library in Baltimore. She used adult books extensively with young adults to broaden their experience and enrich their understanding of themselves and their world.

Fullbooks is Full of Full Books

I like libraries and bookstores.  I like going to our local Friends of the Library booksales.  I like going to garage sales and second-hand stores to dig around for a treasure or two.  I don’t generally read books online.  However… (I’m bracing myself for the possibility of passionate reactions to this next suggestion):

If you would like to preview (or actually read) a few (thousand) books online, why not hop over to http://www.fullbooks.com/ – it has thousands of full text books.

I love book lists, thus I was happy to discover another list of book lists.  This one from Britain’s Telegraph back in April.  The article is entitled 110 Best Books: The Perfect Library.  I could not discover who wrote the article, and think I know why after reading the comments from readers at the end of the article.  The comments are as entertaining (to me) as the lists themselves.  The article could easily have been entitled, “How to Start a Fight with Readers.”

The Barchester Chronicles by Anthony Trollope

Pride and Prejudice by Jane Austen

Jane Eyre by Charlotte Brontë (Stacy should be thrilled)

War and Peace by Tolstoy

The Portrait of a Lady by Henry James

For Whom the Bell Tolls by Ernest Hemingway

The Ballad of Peckham Rye by Muriel Spark

One Hundred Years of Solitude by Gabriel García Márquez

The Human Stain by Philip Roth

Swallows and Amazons by Arthur Ransome

The Lion, the Witch and the Wardrobe by C.S. Lewis

The Lord of the Rings by J.R. R. Tolkien

His Dark Materials by Philip Pullman

The Railway Children by E. Nesbit

Winnie-the-Pooh by A.A. Milne (Not When We Were Young, but Chartroose should be happy)

The Wind in the Willows by Kenneth Grahame

I, Claudius by Robert Graves

Master and Commander by Patrick O’Brian

Tess of the D’Urbervilles by Thomas Hardy

The Plantagenet Saga by Jean Plaidy